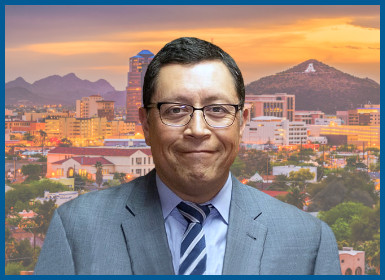 Ron Reyna was born and raised in Tucson, Arizona.

He’s a proud University of Arizona alum, and became interested in law upon taking required classes in Judicial Process and Constitutional Jurisprudence. The law seemed to be an ever evolving and complex system which affected people’s lives in significant and meaningful ways. Ron worked as an intern for United States Congressman Ed Pastor as an undergraduate, and the legislative process proved to be equally fascinating and fast paced. Law school was an easy next step.

Ron attended the University of Arizona College of Law and graduated in the spring of 1997.

As a new lawyer, Ron worked as a law clerk for Pima County Superior Judge Howard Hantman. Ron became quickly familiar with juvenile criminal court proceedings and the families affected by them. It was clear that good lawyers could help a great deal of people gain access to the legal system and achieve substantial justice. But the courts were face paced and complicated. It was clear how an unrepresented person could be easily intimidated.

In the summer of 1998 Ron began to practice law for the first time with the Pima County Public Defender’s Office. Ron primarily represented indigent defendants in misdemeanor and felony criminal proceedings. The adversarial criminal justice setting was an excellent place to learn the intricacies of court procedure. Of course, the regular interaction with judges and juries provided extensive training for the court room experiences which were still to come.